A compact receiver to monitor ships in the seas surrounding Norway is one of several payloads on Norway’s NorSat-1 and NorSat-2 microsatellites, which were launched on 14 July by a Soyuz rocket at Russia’s Baikonur Cosmodrome in Kazakhstan. The Soyuz carried in total 73 satellites, of which the Russian Kanopus V-IK Earth Observation satellite was the main payload. (Launch video on YouTube) The satellites including the Satellite-AIS payloads are owned and commissioned by the Norwegian Space Centre, which will also be responsible for the operation of the two microsatellites. The receivers were developed by Kongsberg Seatex of Norway, with support provided by ESA through the SAT-AIS element of ESA’s Advanced Research in Telecommunications Systems Programme (ARTES).

“The NAIS receiver is a direct response to the increased focus on cost/benefit in today’s space industry,” says ESA’s Carsten Tobehn, SAT-AIS programme manager. ”It was developed using commercial off-the-shelf components, efficient evaluation and testing schemes, and advanced technological solutions. This approach, which allows for faster development cycles, has been applied without compromising performance or functionality.” NorSat-1 and NorSat-2 microsatellites were built by the Space Flight Laboratory (SFL) at the University of Toronto Institute for Aerospace Studies (UTIAS). Both NorSat-1 & -2 measure 20×30×40cm, with two pre-deployed 20x50cm solar wings and a total mass of 30 kg, including the separation systems.

In addition to the NAIS receiver, the NorSat-2 has an additional related payload, an experimental VHF data exchange (VDE) payload that will enable testing of two-way communications. While AIS is designed to provide identification and position reporting/tracking of maritime vessels, VDE addresses growing demand for data exchange by providing additional capacity that complements current AIS services. NorSat-2 is one of the first missions to validate the new AIS and VDE capabilities.

Once NorSat-2 has been commissioned, it will start transmitting VDE test signals. A Norwegian Coast Guard vessel operating around Svalbard will receive and record the signals. Full analysis of the recorded data will be performed offline after the conclusion of the measurement campaign. 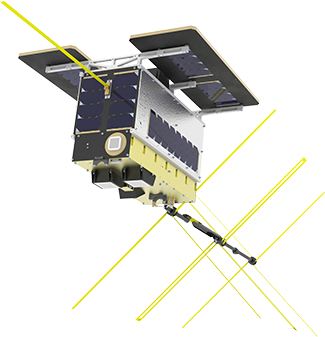 “ESA is supporting the transition from AIS and VDE technology and service demonstration towards operational and sustainable services”, Carsten Tobehn adds. “We see tremendous potential for a broad range of applications and synergies between AIS and VDE, but also for the combination of AIS and Synthetic Aperture Radar imaging for Earth observation and related commercial services.”

“With our closeness to the Arctic and vast areas to monitor, satellite-based observation is of strategic importance for Norway,” says Jon Harr, Smallsat Program Manager at the Norwegian Space Centre. “NorSat-1 and NorSat-2 will each be able to detect 90% of all vessels in Barents Sea and Svalbard in a single pass.”

“The satellite-AIS and VDE payloads on NorSat-1 and NorSat-2 demonstrate Norway’s long-term commitment to this key technology,” he adds.